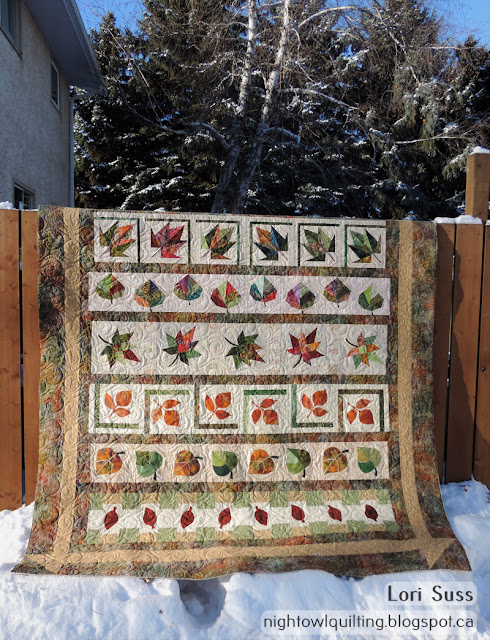 This is Sherry's version of the leaf row quilt.  If I am counting correctly this is the 7th one I've had the pleasure of quilting. If you are interested in seeing the others, type the words "Leaf row" in the search box on the right side bar. 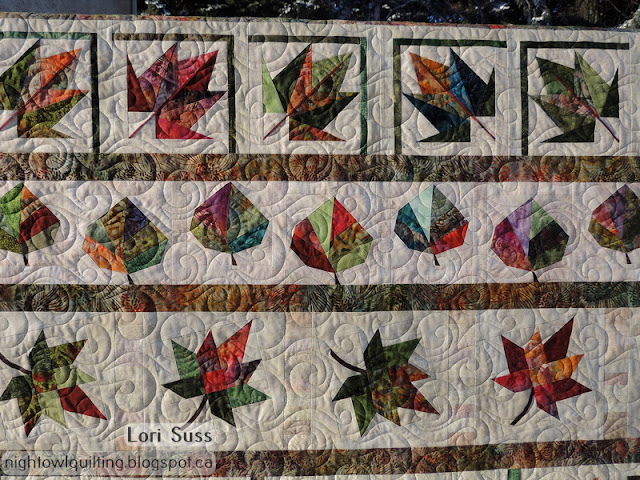 Sherry was one of the leaders of the project and she asked me to share this story.  I dropped this quilt off to Sherry's house and we didn't look at it together as we normally would have.  When she unfolded it the first thing she saw was a "glaring piecing mistake".  Hmm, I didn't notice a quilting error when I was working on it.  I let you see if you can spot it at all before I share where it is. 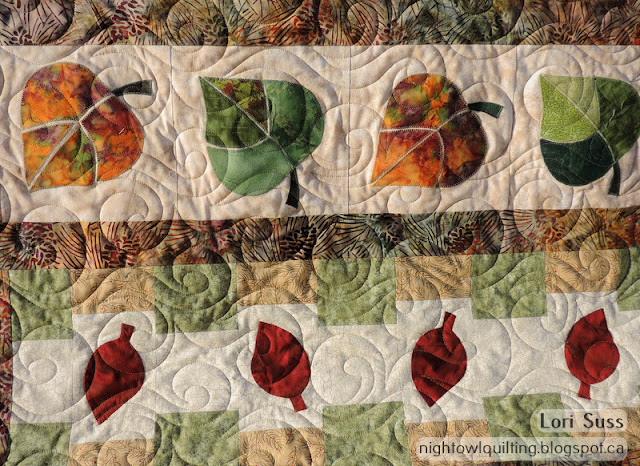 Sherry asked for a simple panto and she decided on Bora Bora which feels like the wind blowing the leaves in the fall.  With the fabrics Sherry used in her border and sashing custom quilting would have been lost, so a panto was a great choice. 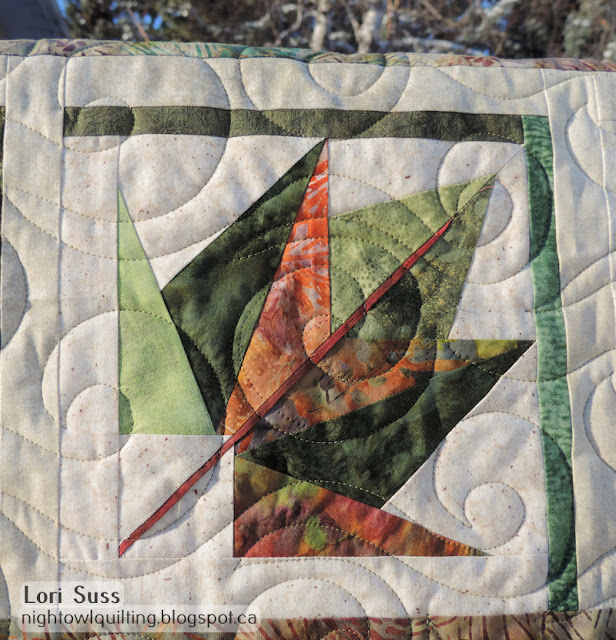 This block has a 3D stem for added interest. 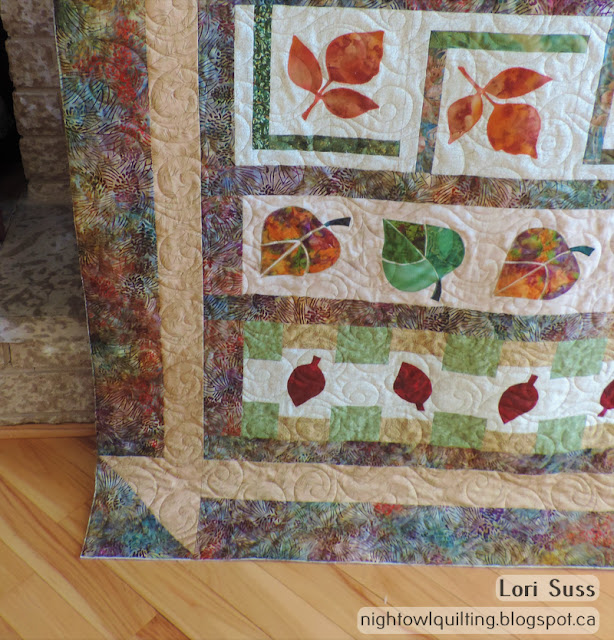 I also like the little bit of interest that this simple but effective border adds. 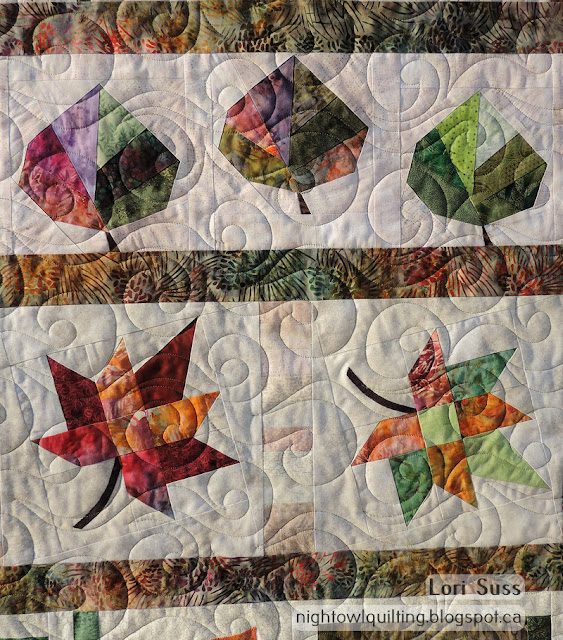 Sherry's quilts often have a scrappy component to them, but I would called it "controlled scrappy."  She has a way of adding just the right amount of an unexpected color to make the quilt sparkle.  The teal blue below is one such example. 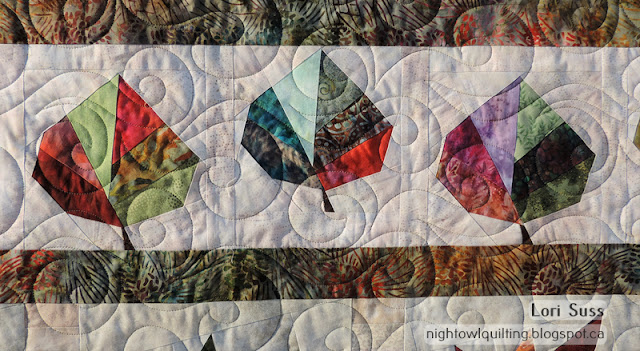 I also love the little ladybugs farming this block.  Just one piece, not a lady bug infestation! 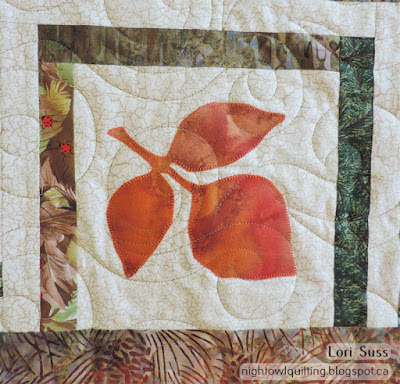 So, have you figured out what Sherry's error was?  Actually the block above is the culprit.   I was too focused on enjoying the lady bugs to see that in the third row from the bottom, all the leaves have framing on two sides except for this one that has three.  I'm sure many of us would leave it and move on, but Sherry can't unsee it, so she is working out a plan to either applique over the extra green bar with beige, or add an extra green bar or two to balance things out.  (Sherry is extremely accomplished at hand applique so this is a viable option for her).  She will stitch in any missing quilting lines when she is done and no one will ever know what used to be. 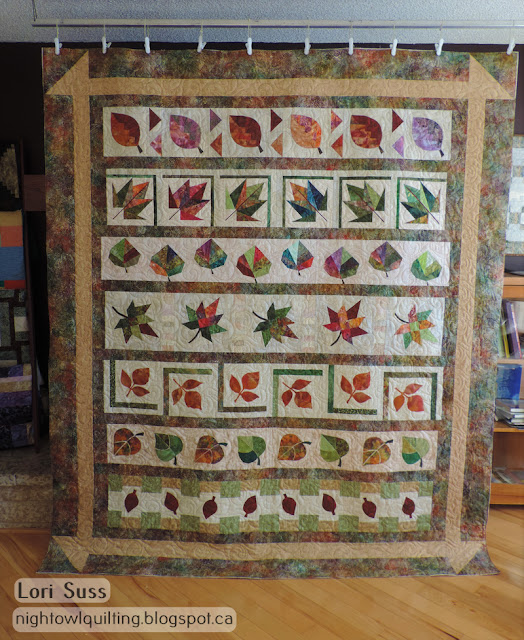