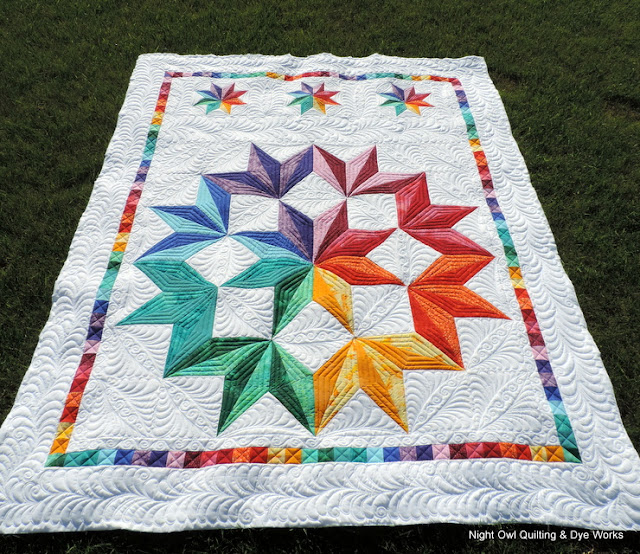 This spectacular quilt belongs to Dianna.  It is a modified version of the quilt called "Rainbow II" from the book "Quick Star Quilts and Beyond" by Jan Krentz.  Dianna added the smaller stars at the top to form the pillow tuck section to make it bed sized. 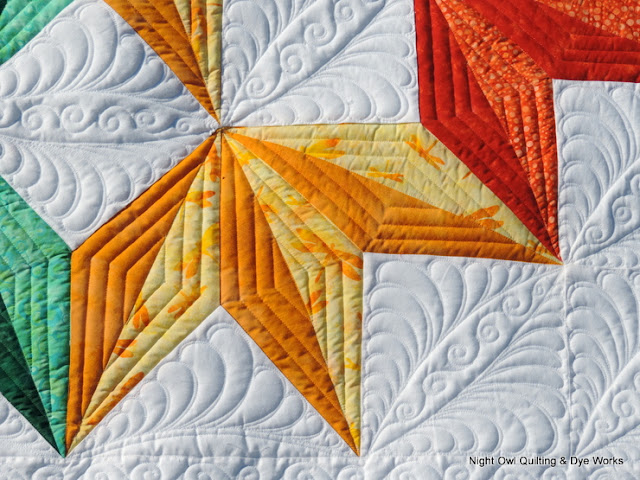 I knew that I wanted a mix a line work and feathers.  The samples in the book exculsively feathers in the quilting design, but I always prefer a mix.  I used Monopoly thread for all the ruler work in the colored star points and the small border.  I didn't want to detract from the lovely colors in the quilt, and I also didn't want to try to match 16 colors of fabric either! I loved the idea of highlighting the center star with a circular frame and feathers.  The only problem I encountered was that all of my curved templates were too small to do the job,  The largest template that I own, or that I have seen in the market so far is one based on a 20" curve.  That size of curve would have taken up the majority of the square and left very little room for feathers.  My husband came to the rescue and cut a 32" curve out of a piece of Plexiglas so that I could accomplish what was in my mind's eye.  It isn't laser cut or etched with lines like a commercial template, but it certainly did the job. 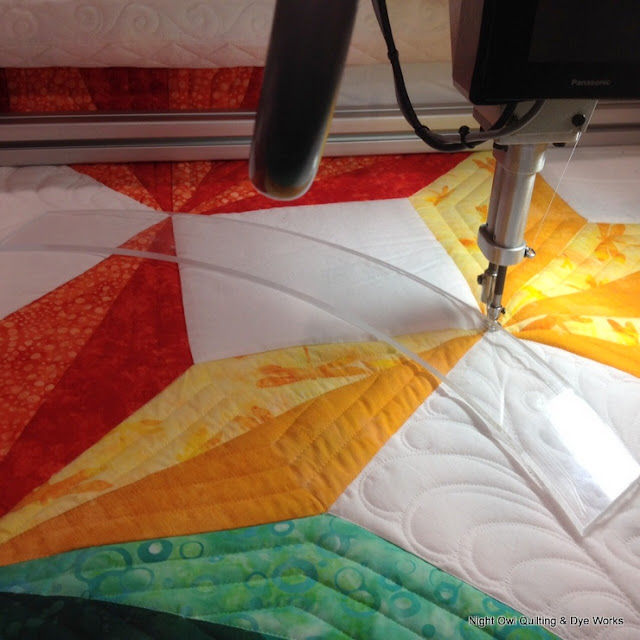 I continued the same motifs the the background and star points on the outer ring. 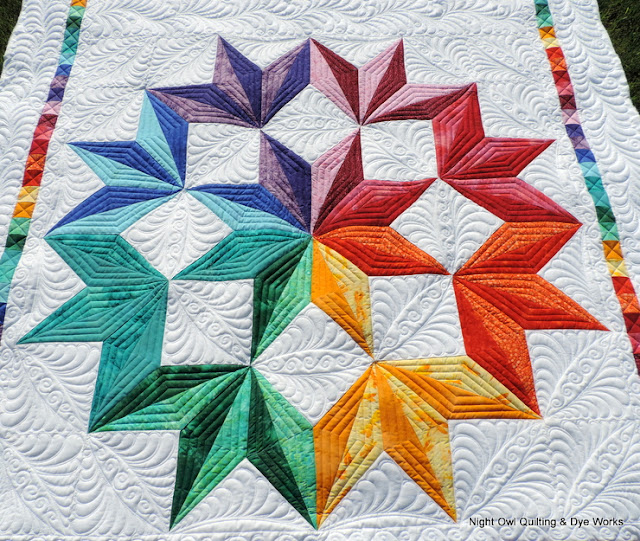 For the borders I knew I wanted to repeat the motifs used in the center of the quilt, so the narrow white border got curls, the colored squares got crosshatched, and the outer border got feathers with a few curls thrown in for fun. 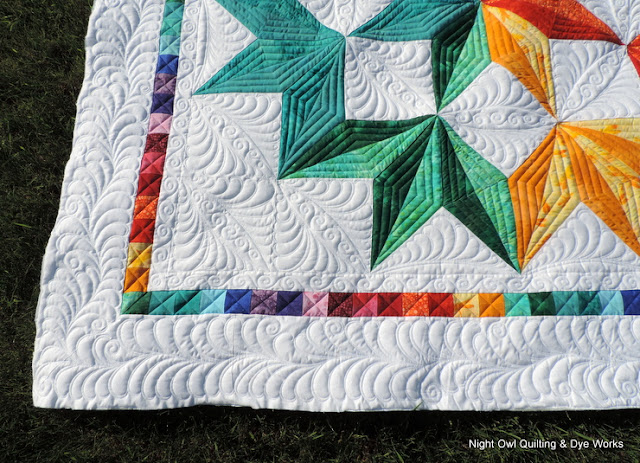 The pillow tuck section did have me scratching my head for awhile, but I very pleased with the results, once again repeating the motifs from the center of the quilt - straight lines in the stars, a row of feathers like the borders, and the melon and feathers in between. 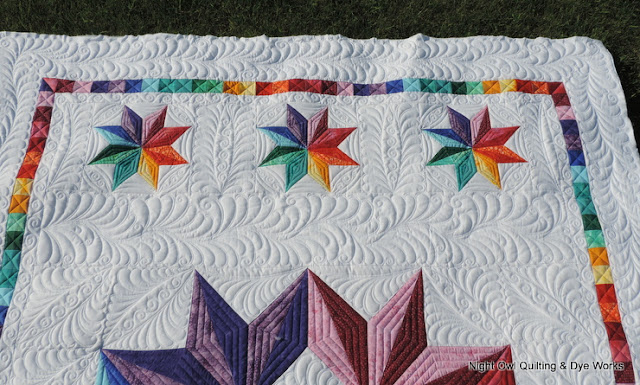 I chose Quilter's Dream Puff batting for this quilt as it is the whitest batting I had on hand.  The front and back of the quilt are pure white, and I wanted to make sure they appeared crisp and clean.  The Dream Puff also provided a nice loft.  I used So Fine in Blizzard for the background quilting, and a Bottom Line on the back. 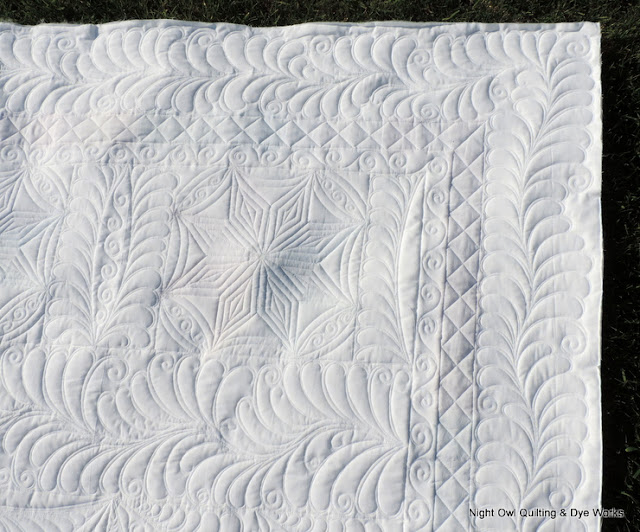 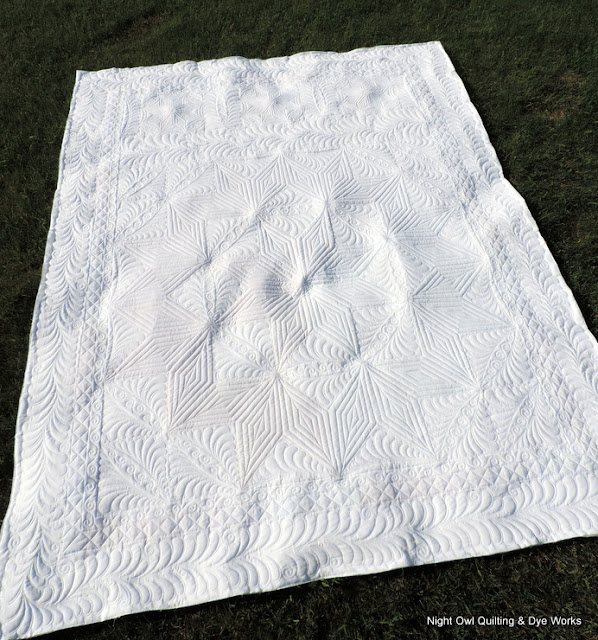 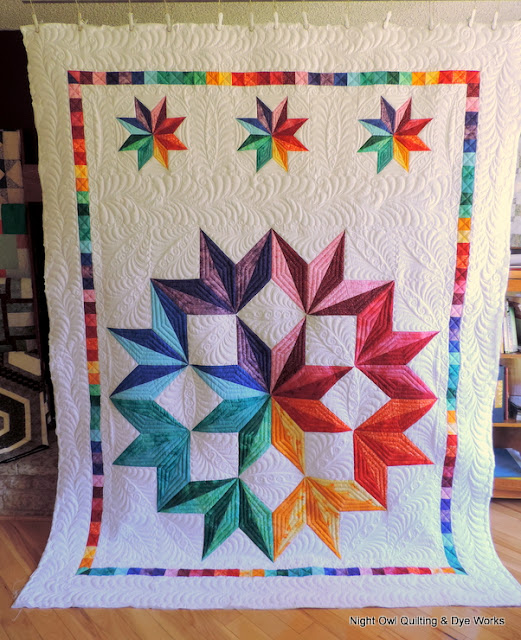